Putz Schedule for the Advent Season

The word putz simply means decoration, but Moravians use it in a unique way to mean a distinctive kind of Christian decoration. In the Middle Ages priests placed figures of the Holy Family in the churches so that people would get a clearer idea of the Christmas story. A Christmas putz tells the story through various figures.

The Christmas putz at First Moravian Church is a 20-minute sight and sound experience featuring Biblical narrative, traditional hymns and 15 scenes telling the story of the birth of Christ. The presentation begins with Isaiah prophesying Christ’s birth and the angel appearing to Mary. The story unfolds with angelic chorus heralding the birth of Christ, the Wise Men following the star and the Holy Family’s urgent flight to Egypt. 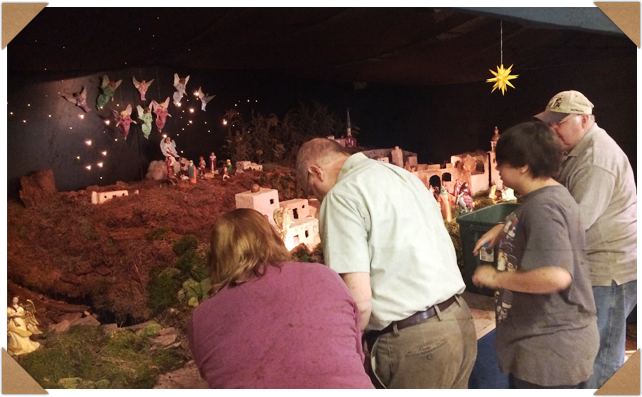 My understanding of the Moravian Church is that historically we have seen ourselves as “leaven” within the church at large and the community. The reality of how this works became clear to me through a recent move to a new community and church. In the first few months after a move you meet lots of new people. I would often hear the question, “What church are you now serving?” When I would tell them that I was now serving First Moravian Church the reply was almost always the same, “That is the church which builds the wonderful Putz at Christmas time!” I noticed that faces would light up as they made this comment. In the six years that First Moravian Church has been building and sharing their Putz they have touched many lives. In sharing this special Moravian tradition they have been a witness to the Good News of Jesus’ birth at Christmas and have been a “leaven” in the community. Yet it soon became clear to me that this Putz has not only touched the lives of those who come to view it, but it has touched the lives of those who are involved in the building of it as well. Recently I asked one of our members to write something of his perspective of this unique ministry. Here is what he has to say about First Moravian’s Putz.

The people that walked in darkness have seen a great light. So begin those transforming words from the prophet Isaiah. Six years ago such a transformation began to take place within our congregation as we started to explore the possibility of a Christmas Putz. Little did we know how this age old Moravian tradition would evoke changes in us. No one knew how this Putz would change those who came to visit and see the Putz. In retrospect, we can see two key ingredients to the positive outcome experienced through this ministry. These two key ingredients were vision and prayer. From the beginning there were some who thought the vision too massive for such a small congregation. These folks were right, and aside from prayer and the Lord’s provision, the view would have been nothing more than an unrealized goal. Much began to happen even from the beginning. The enthusiasm was contagious, and we began pulling together with a hope that was bearing fruit in all our lives. The greatest joy came when we began to see how the Putz affected visitors. Comments from our guest book include, Glory to God, great for all of us . . . keep shining His light . . . the Lord was honored here . . . and much more. One less than typical Friday night, however, started out as anything but encouraging for the hostess and operator who had volunteered that evening. It was a mild evening, not even a hint of snow, and the entire time no one had come to view the Putz. A few minutes before our closing however, we saw a young couple coming up the front walk. The young lady seemed genuinely interested, but her boy friend had about as much enthusiasm for being there as he might have had sitting in a dentist chair. The hostess extended her welcome and gave a brief explanation of a Moravian Christmas Putz. The operator lowered the lights and soon we heard the familiar strains of O Come, O Come, Emmanuel. Twenty-two minutes later the house lights came up to the rousing chords of Hark the Herald Angels Sing. In those twenty-two minutes a change had taken place. The young man that came in with an attitude left with joy and enthusiasm. These folks were the only two people to view the Putz that night. Was it worth waiting for only two people? What do you think? Not only did the young couple go home changed, but a hostess and Putz operator went home that night changed as well. They realized that the light had pierced the darkness and they had been a part of that reality. About a week later this young couple came back with friends. The Good News of the Gospel was spread to two more.

The transformation goes on. From the raucous groups of wide-eyed pre-schoolers to the heartfelt memories shared by a group of senior citizens. So we dream and so we pray. Come and join us. Better yet why not have a hand in changing your community. Build a Christmas Putz. Share the light with those who are dwelling in the darkness.

No Sunday School
Until Further Notice